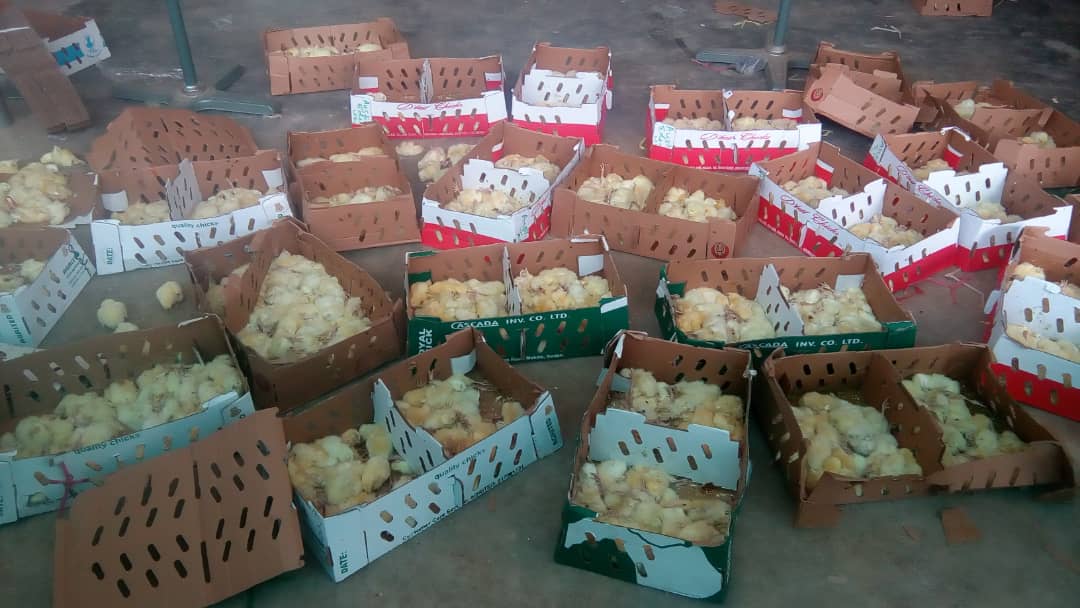 Poultry farmers in Ibadan on Tuesday alleged some police officers at Podo area in Oluyole local government, forcefully turned back 20 buses conveying day old chicks to the Southeastern part of the country.

The Farmers Ambassador, Azeez Maboreje who alerted the media about the unwholesome development, also called the attention of the Oyo State Police Commissioner, Shina Olukolu to the alleged high handedness of his men.

An SOS by Maboreje to the police commissioner stated thus: “good morning sir kudos to you for great works being done in Oyo State.

“It is important to draw your attention to our plight. As at this morning, 20 of our buses carrying day old chicks were returned at podo opposite Top One.

“All effort to engage police officer were abortive as they claimed order from the governor.

“The present situation is serious as the worth of the birds to farmers is in excess of 50million. Our farmers are bleeding already due to negative impact of Covid 19. To add today’s loses to our present suffering is serious and unbearable,” Maboreje stated.

Maboreje said the Police Boss in his reply said they were exempted from the curfew. He said the CP sent another SMS, asking them to proceed on their journey.

But as at this morning when they exchanged messages, Maboreje said the deed had been done as hundreds of the chicks died in the process.

The worst hit farmer; an Ibadan-based hatchery, The Best Line Hatchery corroborated Maboreje, claiming they lost over N50 million naira resulting from death of several day-old chicks supposedly to be transported to other parts of the country.

Rev. Tunde Owolabi, the Managing Director of the company made the disclosure on Tuesday during a news conference held at the company’s premises in Ibadan.

Owolabi said that some police officers had on Monday evening allegedly stopped no fewer than 20 buses conveying the day old chicks to other parts of the country from Ibadan.

He said that the policemen had stopped their vehicles at Podo area of Ibadan and returned them on the claim of a new directive from the federal government.

“We trust God that with all effort that is on ground, COVID-19 should be a thing of the past very soon. But by the time this problem is over, there is a looming danger of scarcity of goods.

“Hunger problem is far far greater in dimension compared to the danger COVID-19 poses. The number of birds that is involved today is alarming.

“We have about 20 buses that are affected today and in each of these we have about 8,000 to 10,000 birds.The monetary value is huge. We are talking about over N50million worth of birds,” he said.

Owolabi wondered when the Federal Government ordered policemen not to allow movement of agriculture produce to other parts of the country as essential products.

“It is rather unfortunate that these our birds were returned last night. Birds that are meant to travel at the cool hours of the day and that is the reason you see us travel in the night.

“Our drivers have the passes. As you can see with me here, we have all the documents from Poultry Association of Nigeria and from Ministry of Agriculture. Each of the drivers carry the papers”.

Alhaji Asimiyu Oyetunde, the Chairman, Day Old Chicks Merchant Association of Nigeria, expressed sadness over the attitude of the security agencies inspire of the several directives.

Oyetunde said that their drivers who were moving the day old chicks from Ibadan to other states have several documents backing the movement of agricultural produce.

He said that a larger portion of the day old chicks died as a result of the hindrance, saying the loss was over N50 million naira.

“All our effort to make sure they move yesterday proved abortive because none of them even answered us. They said that was the new order which we are not informed.

“We have many papers from the federal ministry of Agriculture, Governor’s Forum, Oyo State Government and the Inspector General of Police to prove that agricultural produce have free passage in any part of the country,” he said.

Also, Mr Gbemisoye Agboola, the Oyo State Chairman, Poultry Association of Nigeria(PAN), expressed sadness over the huge loss caused by the security personnel who acted contrary to the directives.

However, Mr Gbenga Fadeyi, the State Police Public Relations Officer, told newsmen that he was yet to be briefed on the matter.

Fadeyi assured that the issue would be investigated as soon as they get the details.