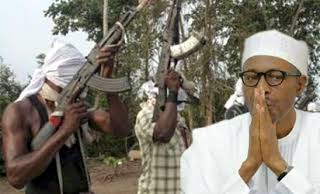 Socio-Economic Rights and Accountability Project, (SERAP) has sent an open letter to President Muhammadu Buhari requesting him to use his “good offices and leadership position to urgently set up a commission of inquiry to investigate the spending of defence and military budgets between 1999 and 2018 in order to promote transparency and accountability in the sector.”

SERAP said the probe would: “ensure that the funds meant for military operation are spent for that purpose and end the vulnerability and killings of Nigerian soldiers such as the reported death of several Nigerian soldiers in the recent Metele Boko Haram attack.”

The organization also urged President Buhari to: “immediately refer to the International Criminal Court (ICC) pursuant to article 13 of the Rome Statute, all allegations of corruption in the spending of funds meant to purchase arms to empower Nigerian soldiers to fight Boko Haram, including the apparent diversion and sharing of the over $2 billion under the former government of President Goodluck Jonathan and approved spending by your own government.”

In the letter dated 23 November 2018 and signed by SERAP senior legal adviserBamisope Adeyanju, the organization said: “We believe that referral of the cases to the ICC would serve as a deterrent and ensure that Nigerians, particularly those in the Northeast of the country whose human rights including to life, to human dignity, and to an adequate standard of living have been violated are not denied justice and effective remedies.”

The organization expressed “concern that several billions of naira allocated to the military to defend the country have neither contributed to improving the ability of Nigerian soldiers to fight Boko Haram and other armed groups nor provided the much-needed security especially for Nigerians in the North-east of the country.”

The organization urged Buhari to: “move swiftly to implement these recommendations as a way of demonstrating your government’s commitment to end the perception of lack of transparency and accountability in the spending of military budgets in the context of the conflict in the Northeast and to ensure the safety and security of our solders and all Nigerians in that part of the country.”

The letter read in part: “The military’s inability to respond adequately to the Boko Haram insurgency suggests among other things a mismanagement in the spending of the country’s defence budgets. Establishing a commission of inquiry to investigate how defence and military budgets have been spent since 29 May 1999 would help Nigerians to know if the funds meant to defend the country and forpurchase of arms to empower Nigerian soldiers to fight Boko Haram have been transparently and accountably spent.”

“The proposed commission should be led by a retired justice of the Court of Appeal or the Supreme Court of Nigeria. The activities of the commission must be open to the public and all those who have been responsible for the spending of the country’s defence and military budgets should be summoned to give a public account of how the money was spent.”

“Testimonies should be taken in a way that ensures that specific military operations are not disclosed and national security not compromised. The commission should make recommendations including on the prosecution of those found to have mismanaged and/or stolen public funds meant to fight Boko Haram.”

“SERAP is concerned that many cases of those alleged to have diverted and shared funds meant to purchase arms to empower Nigerian soldiers to fight Boko Haram have stalled. Given the continuing delay in the prosecution of such cases, and the need to send a strong message that corruption in the spending of funds meant to fight Boko Haram insurgents will not be tolerated, we urge you to immediately refer all such cases for investigation and prosecution by the ICC.”

“SERAP notes that article 13(a) of the Rome Statute of the ICC provides a basic right to states parties including Nigeria to refer to the ICC prosecutor cases such as those involving mismanagement and/or stealing of funds meant to purchase arms to empower Nigerian soldiers to fight Boko Haram.”

“Opacity and deficiencies in the way arms purchases are decided and controlled if not urgently addressed would continue to expose our soldiers to risk of attacks and killings; displace people and destroy their means of livelihoods and render them homeless, thereby undermining human rights, including the right to life, right to personal security, right to education and right to livelihood.”

“Nigeria is a state party to the African Charter on Human and Peoples’ Rights and a range of international human rights treaties and therefore has a duty to respect and protect human rights including a duty to protect people against human rights abuses by third parties.”

“SERAP also notes that Nigeria is a key member of the Economic Community of West African States (ECOWAS), which has ‘accountability, economic and social justice’ as part of the fundamental principles contained in its Revised Treaty. Nigeria is a member of the Commonwealth, which has as its core principles ‘transparency, accountability, legitimacy, and responsiveness.’”

“Article 1(c) of the UN Convention against Corruption which Nigeria has ratified states the purpose of the treaty as including: ‘to promote integrity, accountability and proper management of public affairs and public property.’”

“According to reports, at least 118 soldiers and officers were killed when the terrorist Boko Haram sect attacked Nigeria’s 157 Task Force Battalion in Metele village of Borno State on November 18. 153 soldiers reportedly remained missing in action. Nigerian troops fighting on the frontline of the Boko Haram conflict have also reportedly deplored the poor state of their equipment, including outdated vehicles.”

“More than 27,000 people are reported to have been killed in the many years of Islamist insurgency in the North-east of the country that has triggered a humanitarian crisis and left 1.8 million people without homes.”