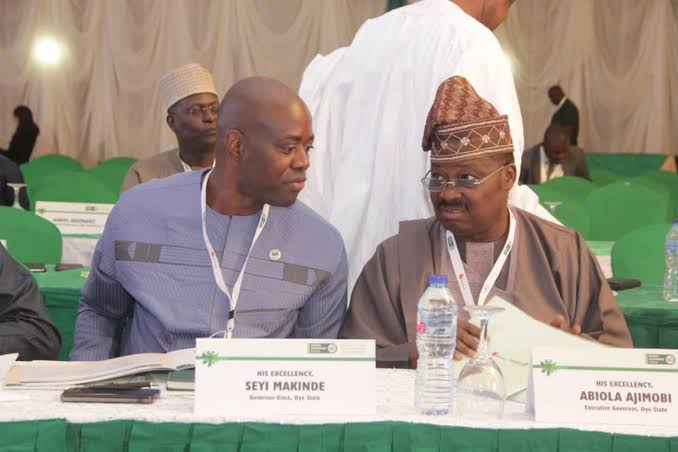 Former Governor of Oyo state, Senator Abiola Ajimobi on Sunday described his successor’s constant reference to about N150 billion debt he purportedly left behind as ‘a needless mudslinging.’
Ajimobi who spoke with reporters at his Oluyole Ibadan residence, after Eid-el-kabir prayer at Liberty Stadium now Obafemi Awolowo stadium, queried the hullabaloo about the matter.
According to Ajimobi, the state was not among the first 10 states in the list published by Debt Management Office, Abuja.
The incumbent administration of Governor Seyi Makinde had alleged the Ajimobi administration of leaving behind huge debts for the state, a development he said has made ‘Oyo state to be insolvent.’
But Ajimobi had a contrary view, “if you look at the debts owed by each state in the country as published by DMO, you will see that Oyo State is not even among the first 10 states.
“United States is the number one debtor in the world. Government by nature and establishment must continue to have debt. They must be able to use people’s money to make money,” Makinde said.
He said that 50 percent of the debt owed by his administration was drawdown debt from the World Bank, adding less than 30 percent of it had been accessed.
According to him, “As we do the work, World Bank comes to verify and pay. We still have about 70 percent of it, so this administration can stop taking it if they don’t want it.”
On allegations that his aides carted away official vehicles, Ajimobi said that the officials paid for the vehicles based on decision taken by the government.
The former governor said that there are papers written on it, urging the incumbent administration to beam is searchlight on civil servants on those vehicle alleged to have been recovered from mechanic workshops.
“When you are in government, there are policies and decisions to be taken. We took the decision that anybody using vehicles at the time should take it away and pay. This is also practiced by the federal and other state governments.
“When I got to office, I didn’t see any vehicle. My brother, former Gov. Adebayo Alao-Akala took his vehicles away and I did not talk.
“There are civil servants who steals whenever politicians are leaving government. Let them go and check those civil servants.
He alleged that there were no cotton, furniture chairs and electronic equipments in the government house when he moved into it, saying it was because Alao-Akala left government few days before his resumption.
Ajimobi said that everything at the government house and office were intact because he worked till the last day of his administration.
On insecurity, the former governor described Makinde as very lucky because of the already existing security structure bequeathed to him by his administration.
He called on Makinde to leverage on the many good things his administration did, urging him to make amends where the made mistakes.
“We thank God that he has started seeing some of the good things we did. No government in the state has ever done as much as we have done. This does not mean we did not make mistakes,” he said.
Ajimobi said that he would take the decisions he took while in office if he had the opportunity of being the governor again.
The former governor appealed to aggrieved members of APC to reconcile for the good of the party, saying his only regret was trying to be perfect in an imperfect world.
“There are many of our members who genuinely have reasons to be angry but 90 percent of those angry have no reasons except that they were not appointed.
“The houses, name and titles some of these people are using today, they got it by working with us. Irrespective of whatever grievances, let us come together in the spirit of eid-el Kabir.
“Those I believe have genuine reasons to be angry, I have spoken to them. Some, I will not speak to them, they must come back,” he said.
Ajimobi said that it was the son who begs his father even when the father offends him, saying no matter how bad, a father would not seek blessings from God on the name of his son in heaven.
According to him, “Even Jesus Christ in his lifetime referred to his father, God severally in the bible.”
The former governor prayed that Makinde succeeds, adding that the people stood to gain nothing from his failure.
“I pray that Makinde succeeds and I will support him to succeed anytime. In supporting him, we are helping the state,” he said.