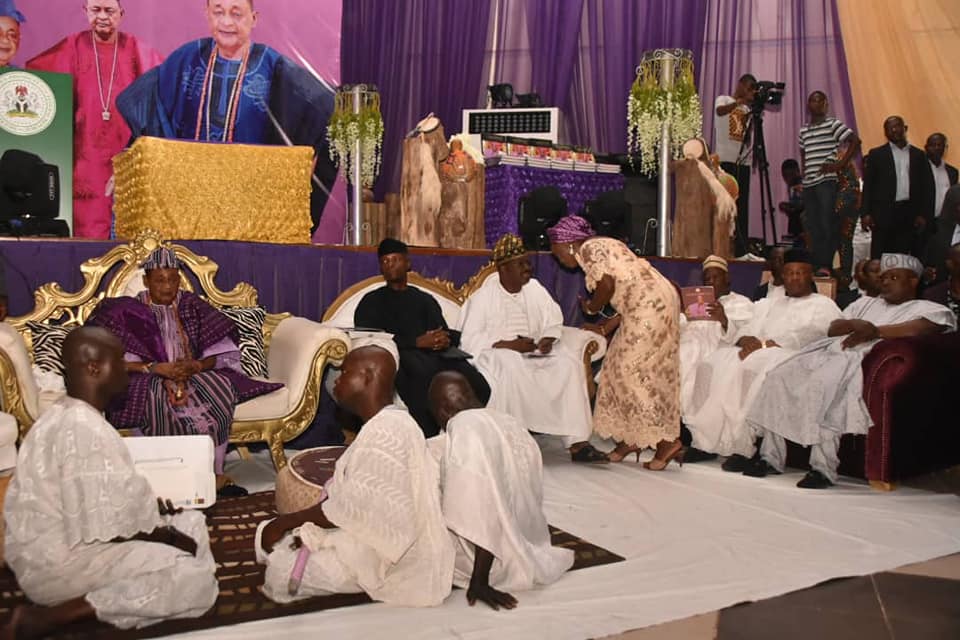 Eminent Nigerians from all walks of life on Saturday graced the grand finale of the 80th birthday of Alaafin of Oyo, Oba Lamidi Olayiwola Adeyemi III and the book launch held in his honour.

Others were the former President Goodluck Jonathan represented by the gubernatorial candidate of the Peoples Democratic Party (PDP) in Oyo state, Engr. Seyi Makinde; the Olu of Warri, His Majesty, Ogiame Ikenwoli; and governorship candidate of the APC in Oyo State, Chief Adebayo Adelabu.

Eulogising the celebrant, Osinbajo said Oba Adeyemi has demonstrated true leadership and stood on the path of truth as a leader of the Yoruba race.

Osinbajo who represented President Muhammadu Buhari at the event, said, “Leadership is not in title no matter high sounding or revered the title may be. Ultimately, the true leader of the people is the one who serves his people by personal sacrifice and by the demonstration of personal conviction even to his own detriment.

“The Alaafin has in the past 47 years on the throne, by words, deeds and personal sacrifice, demonstrated true leadership. He has time and time again stood on the side of the truth and personal conviction of what he thought best for the Yoruba race. Among leaders, traditional leaders, you have a more profound role to play. Traditional leader is the true custodian of the moral essence of the people.”

In his speech, the Ooni said he was grateful to witness the celebration of the monarch, noting that although he was a king like the Alaafin, he prayed God to grant him long life like Alaafin.

On his own, Ajimobi thanked Alaafin for supporting his government, describing him as a quintessential monarch and a man of strong ancestral heritage.

“It is an occasion to thank God and take stock of the unique blessings that the king is endowed with. At 80, he is still productive so much that he produced two sets of twins through his queens recently. He supports government at all time,” said Ajimobi.

Makinde magic in Oyo and the feedback from Alaafin | Moses Alao

Adelabu: Forget My Pedigree, Ajimobi Made Politics Attractive to Me .Lists 4 Factors He Resigned as CBN Deputy Governor