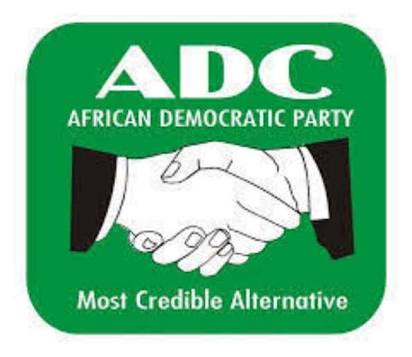 A press release issued by the party’s PRO, on Thursday, Comrade Adedapo Ademola bears it all.

PRESS RELEASE:
THE POSITION OF THE ADC OYO EXECUTIVES ON THE CONDUCT OF THE PRIMARY ELECTIONS IN OYO STATE.

Upon assuming office as officers of the greatest party in Oyo State being the African Democratic Congress (ADC), our major task was to mend all hitherto broken fences, harmonize all warring factions and give a solid backing to every development-oriented programmes calculated to bringing electoral victory to our great party in the forthcoming elections coming up in Oyo State.

Political interests such as Labour Party, Accord Party, CNM, Unity Forum, Old ADC, some PDP members and other political groups came together and berthed ADC. Then we believed that to achieve a major breakthrough as a political party, all factions must forge a common front and speak a common language without any discord or fractionalization. That was the philosophical underpinning behind the emergence of the ADC in Oyo State.

However recent developments in recent times in our dear party shows that the conduct of some persons within the party is now becoming overbearing.

Some days ago the national leadership of our great party sent in the guidelines for party screening and primary elections for the 2019 general elections.

This document was ably signed by Chief Anayo Arinze the national coordinator of electoral matters and INEC liaison. Inherent on the face of the guideline is the fact that the National Working Committee of our great party desires a rancour free primary elections and even left it at the discretion of the State to choose the mode of primary elections we want to take provided it will aid in winning elections.

It is most saddening to posit sagaciously that despite the provisions of paragraph 1 of the guidelines empowering the State Working Committee to set up the 7 man State Primary Election Local Organizing Committee, officers from the national level in connivance with some persons within the state went ahead to turn the selection of the committee into an esoteric and mysterious subject. Names were imposed on the Oyo State Working Committee without dues consultation with the leadership of the party at the state level.

Current events point to the fact that all the representatives of the national Working committee did was to play a divide and rule game with the state executives by selecting members of the State executives and coopting them as members of the primary elections committee without consulting the State chairman. This is with respect, not healthy for the survival and unity of the party. It is an effrontery on the authority of the state chairman.

Without donning the garb of preposterousness, it is also apt to posit that the 7 man election local organizing committee had been operating within Oyo State without carrying the state chairman along. It defies all political permutations and commonsense for national officers of the party to visit a state without paying a courtesy call to the state leadership of the party most especially when the national officers are even from Oyo State. Attitudes such as these are tantamount to injuring the goodwill, unity, zeal and oneness of the party.

All things being equal, though paragraph 8 of the electoral guideline of the party provides that the decision of the national Working Committee shall be final on all primary elections, it is also provided in the same guidelines that particularly at paragraph 13 that simple majority of aspirants in each state shall decide on the electoral system at a pre-election meeting that shall be conducted by the state primary election Committee with the state working committee members as observers. It is not only unfortunate but most unfortunate that the electoral Committee is bent on imposing candidates on every other aspirants as there is no move by the electoral Committee to either work in partnership with the state working committee or call all aspirants to know their wishes on the kind of primary elections they prefer.

I say this without any spirit of immodesty that the only means of allowing and maintaining the unity of all groups comprising the ADC and to also ensure fair play among all aspirants is to allow transparency and democracy come to play. Every aspirants and every stakeholders must be carried along.

The general consensus is to allow the members of the state working committee perform their duties. Any imposition attempts by anybody will not lead anywhere. All blocs, groups and interests must be protected. We hereby urge those concerned to consider the statement of the greatest President of America of all time Abraham Lincoln when he said in quote: “I shall do more whenever I believe what am doing helps the course. I shall do less whenever I believe what am doing hurts the course. I shall correct errors when shown to be errors and I shall adopt new views so far as they appear to be true views.

To this effect, the State Working Committee of the African Democratic Congress Oyo State hereby resolves as follows:

2. That the Oyo State Executive committee of ADC hereby dissociates itself from any kangaroo consensus candidates into any political office of the party.

3. That both the Oyo State Primary Election Local Organizing Committee and the State Working Committee will meet within the next 24 hours to fine-tune the modalities for the meeting with all aspirants in the party to determine the type of primary elections the aspirants desire.

4. That members of the Oyo state Working Committee are set to partner with the national working committee in a bid to achieving the much desired result of winning all elections in Oyo State come 2019.

5. That all stakeholders within the party be fully and maximally carried along.
It is our strong belief that all these factors put together will strongly position the party well ahead of the 2019 elections without any internal wrangling. It is better to err on the side of surplus than err on the side of decrease.

No President Globally Can be as Irresponsible as Nigerian President, Says Kukah