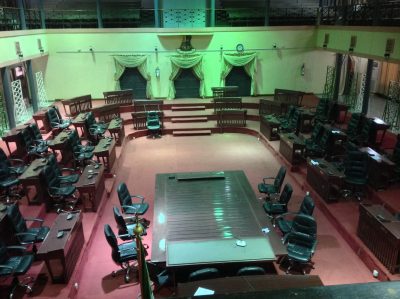 Members of the Oyo State House of Assembly, including the Deputy Speaker, Hon. Abdulwasi Musah, have officially announced their defection from the ruling All Progressives Congress (APC), Accord and the Labour Party to the African Democratic Congress (ADC).

The breakdown of the decampees are five from the APC; three from Accord and one from the Labour Party respectively.

The letters of the lawmakers’ defection to the ADC was read on the floor of the assembly by the Clerk of the house, Mr Paul Bankole during a plenary on Tuesday.

The defection of the nine brought ADC members in the house to 12 with the APC now having 18 members. The PDP have two members left in the house.

ADC became one of the biggest parties in the state after members of the Unity Forum, hitherto in the APC; Aggrieved Peoples Democratic Party (PDP) and Labour party joined the aborigen ADC members in what was described as the biggest coalition of the oppositions in recent time in the state.

Atiku Promises to Win Oyo, Other South West States for PDP in 2019

Ayandele To Oyo APC Delegates: Go For Gold On Saturday