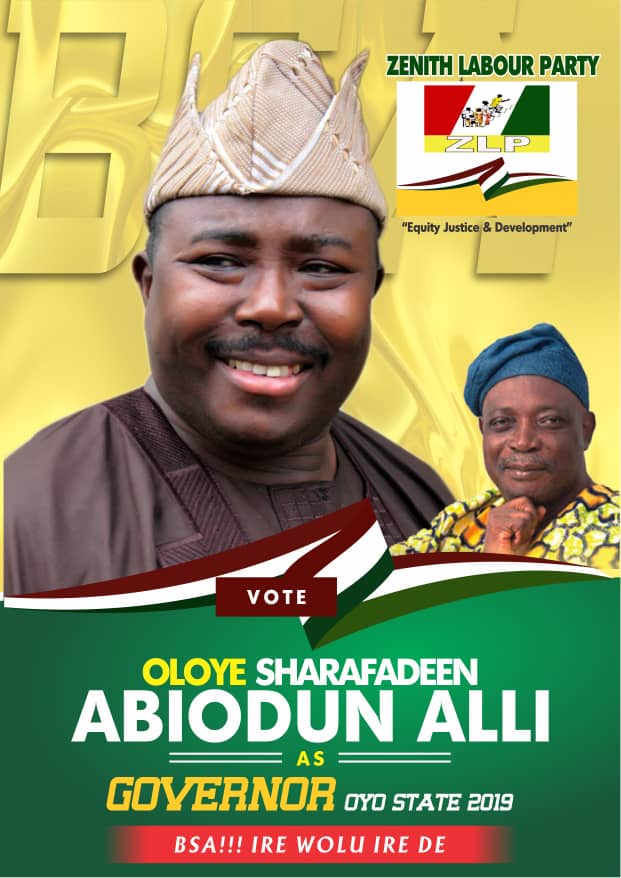 The gubernatorial candidate of the Zenith Labour Party (ZLP) in Oyo state, Chief Sharafadeen Abiodun Alli has lamented that many retirees from Oyo state are dying before receiving their gratuities because of the government’s alleged indifference to their plight.
Alli at a media parley on Friday in Ibadan also alleged that those expected to receive their monthly pensions were also being deprived of it, due to the insensitivity of those running the affairs of governance.
He explained that his party would soon make public, the statistics of people waiting to receive their gratuities but died along the line, because of their inability to purchase needed drugs for their health challenges.
Alli said the ZLP would sign a pact with labour leaders; their members and the pensioners, to rebuild their confidence ‘that hope is in the horizon for them from May, 2019 through a God-fearing administration under the Zenith Labour Party.
On the education sector, Alli, a former Secretary to the State Government lamented the rating of the state in public examinations especially West African Examinations Council (WAEC), recalling that under his boss, former Governor Rashidi Ladoja, Oyo state was occupying second or third positions between 2003-2007.
Also See

Ladoja has nothing to do with Accord Party – Loyalists

Similarly, he decried what befell Ladoke Akintola University of Technology (LAUTECH), Ogbomoso which was rated as the best state-run university in Nigeria and later, the fifth best institution in the country when the Nigeria Universities Commission (NUC) rated all institutions; Federal and states-owned during Ladoja’s administration.
Promising to revamp the health sector by repositing the primary health care centres to provide succour to the people across the 351wards of the state, Alli also said “our administration will take-off on three major areas of Education, Health and Agriculture” to restore their lost glories.
“After those major areas, we will move to the rehabilitation and reconstruction of roads especially in less cities and rural areas across Oyo state to ensure that agricultural products get to the city on time. We plan to generate massive employment for our youths and equip our women with vocational tools and seed monies for their businesses to thrive,” Alli promised.
On why he and Ladoja have been changing political parties, Alli said they were after good governance and abundant lives for the people of the state.
Said he, “Senator Ladoja has been saying it on both the electronic and print media interviews that he was after good governance. That’s basically the point and with the ZLP, the people of the state can now heave a sigh of relief. Their taps will run again. We will reintroduce 30pupils per class policy. Civil servants and the entire workforce will no longer be victimised. Retirees will get their gratuities as and when due and their monthly pensions will be paid same time with those in active service to grow our economy and make life better for the masses.
“We will run a people-oriented government and bring back our investments in the area of asphalt plant for quality roads; tractor assembly plants for agriculture. We are after a total rebirth of Oyo state and our institutions will work again. We have taken stocks and by the grace of God, we will not let the masses down. We are fully prepared for the task ahead, so help us God”, Alli added.