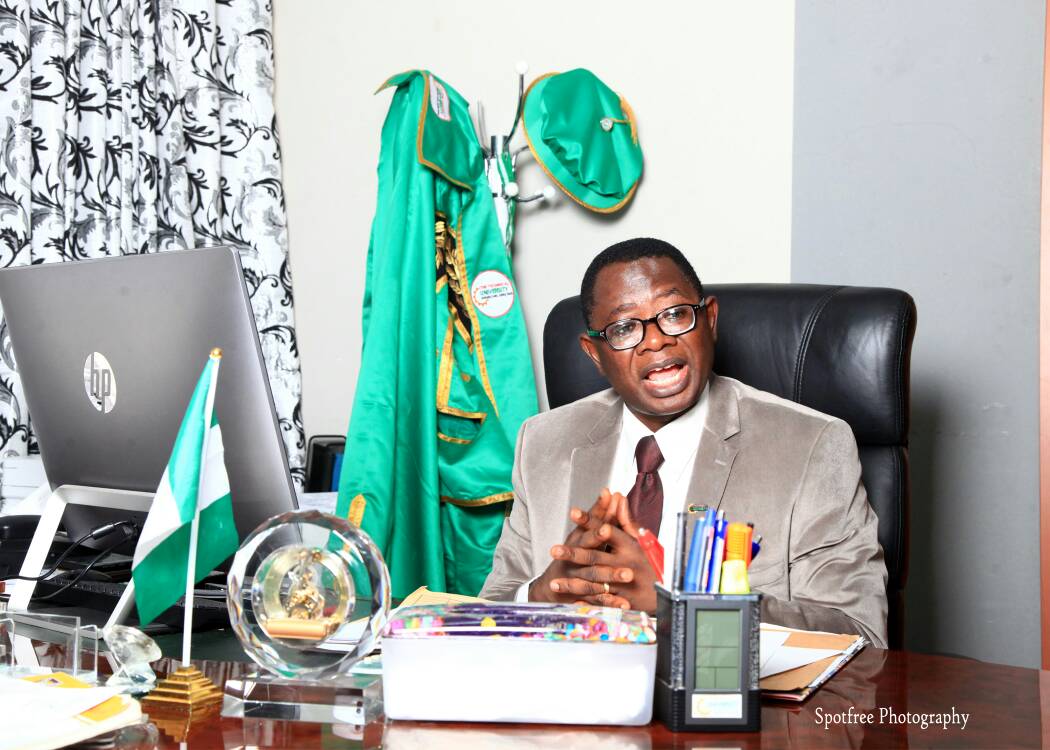 Within just one year of its establishment, the First Technical University Ibadan is on the fast plane to place its presence on global map within the shortest possible time, its pioneer Vice Chancellor, Professor Ayobami Salami spoke with Pacesetter News… Excerpts below

What is the difference between the Technical University and other conventional universities?

I have been asked to answer this question several times and we have to keep explaining until general public understand the main difference between us and other universities or polytechnics.

Even we can interrogate that further, there are a lot of issues raised on products’ deficiency from Polytechnics and even products from conventional universities as there are questions raised on whether they can live up to expectations of the society base on certificate they possess. I use to say that the problem of the country’s education is not about knowledge gap but skill gap. But in this technical university, we both address the issue of knowledge and skill gap.

Why the university is renamed as First Technical University?

The established university was amended by the Oyo State House of Assembly based on proposal that was sent to the assembly. We used to be called Technical University but now we insert ‘first’ before it and we are now First Technical University. Let me explain reason behind that. By the grace of God come 10 or 15 years, the university is going to be a model that many governments and private sectors will begin to replicate in several places. And therefore, from the word go, we need to reassert our position in history.

But in the whole of the West Africa, we are the first University that was conceived, established and operated from the word go as the technical university. Just like First Bank, you don’t need to argue that it it is the first established bank in Nigeria.

That is one aspect of the amendment to really assert our place in history. But apart from that, the amendment allows the university to fully operate on the Public Private Partnership (PPP) model, that is, we can now be the the hybrid of the public and private sectors. This allows us to enter into robust collaboration with private sector in furtherance of our missions of this university to ensure the long aimed goal of this university. It is only when people want to play politics that they don’t say truth. We all understand that education is a social responsibility but the reality on ground is that government has not been able to fully fund the university or tertiary education to the expected level. And there’s no free lunch in Freetown, the last time I visited Freetown, I paid for my lunch (general laughter). And that was very much of recent. If government is not ready to really pay the full bill and we don’t want the parents to pay it, then there’s going to be deficiency on the part of the products. This is the reason we need to leverage on the opportunities available with the private sectors so that we will have capacity to do what is expected of us.

From your explanation, the school is run on private orientation, who really owns the university?

Let me say now and clearly that the university is owned by the Oyo State government. But what the government is doing is to allow the private sector to complement its effort so that the burden will not rest squarely due to limited resources. Due to reality on ground and the Nigerian milieu to realistically be able to generate and access resources needed for the full implementation and execution of these missions, the government is now giving a window to the private sector to complement the effort but it is not a profit making means for them, though we have partners who can assist in areas like building hostels and this is one of the areas business partners can operate. But beyond that, we are looking forward to angel investors and these are people who give philanthropic gesture without profit and even don’t want their names to be mentioned.

We also have legacy donors. They don’t also look for profit but wants to mortalize their names to show the world that they are part of the success of the university. Example is Dr. Tunde Afolabi who wants to have his institute in the university and that will cost over N1billion and the institute will be named after his company but is not expecting any profit.

What are the courses you run and their relevance?

Let me first say that before we commence full academic activities, the National University Commission (NUC) decided to conduct resource verification to this university in July 14 to 17 last year. And the aim was to access our facilities, human and material resources and know if we can actually deliver on what we promised. And by 1st of August 2017, we were allowed to run 15 programs. Let me put on records, when we applied to NUC, we actually applied for 14 programs. When NUC came here and saw what we have both the human and other resources, they said we suppose to have 15 programs.

The relevance of the programs are as follows starting with programs that are not common in other conventional universities.

Number one is Biomedical Engineering. In Nigeria today, University of Lagos perhaps is only the university with us that run the program and we started the same time. Sophisticated medical equipments are used in our health industry today. The equipments are not manufactured in Nigeria but are imported. And when the equipments breakdown, we don’t have people that can maintain or repair them. So, when they breakdown, we need to fly in experts from outside the country to either help to maintain or repair them or look for money to buy another equipments. But this program in our university will fill the skill gap in the country.

Also Cyber Security, I don’t know of any university in Nigeria today is running the program though I stand to be corrected. We keep on saying that this is a digital age where we are moving to e-governance, e-security, e-banking and so on. And one of the issues that goes with these is, the issue of cyber crime. By global ranking, Nigeria is Number 3 in the world with cybercrime and after is US and UK.

But we don’t have people who are trained and skilled in fighting cybercrime. So, this university is filling the skill gap to train set of people that can actually make sure that they mitigate this issue of cybercrime in Nigeria.

Also, software Engineering, if you’re a software engineer, you don’t need to look for job or big building to operate. All you need is your laptop and internet connectivity. You can write programs and make huge money from it. A good software engineer look at problems people are having, write program on it and make your money. And only few universities running this course and are FUTA and this university.

And the common programs, the way we train our students here is different from ways conventional universities train them. The graduates from this university are products of both the university and the industry which combines the skills and theoretical knowledge.

On this note, we have signed MoU with the National Society of Engineers and private sectors to reserve spaces for our students for industrial exposure where facilities for their trainings are available. I have worked in the conventional university for 30 years before coming here as a pioneer Vice Chancellor. There is what is called SIWES in conventional universities. It is more or less now to fulfil all righteousness because the students don’t have appropriate place to do their industrial trainings. We are not doing ours that way. We secure places for them where facilities are available for their trainings.

Also, all the students must be able to submit a final year project before he or she graduates and the project must able to practically solve a societal problem because their projects are their products. And that’s why we collaborate with industries. The industries will tell us their challenges and is this challenge the students will write project on. The students that graduated from this university are not just certificate wielding graduates. From here, they go to school of entrepreneurship and vocational studies. In that school, you enrol for at least two major vocations of your choice related to your training. You will go through that training for three years and will be certificated in those two vocations and in third year, you will be asked to write business proposals on those vocations and bank of industry is partnering with us to sponsor some of those projects so that when the students are in the university, they can begin to have these projects executed and we monitor them.

And let me say that we planned it for third year but has started happening in the first year. How? The World Bank has approached us to work with us after they have seen relevance of our activities. They have set up a bootcamp in the university where students with best idea is supported with fund.