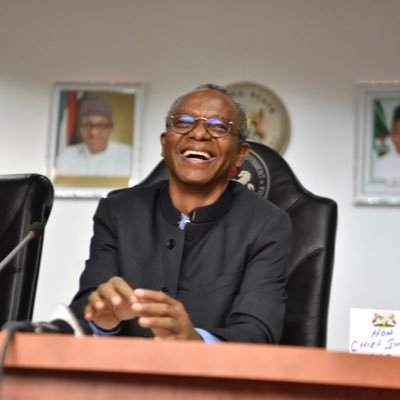 The Executive Governor of Kaduna State, Mallam Nasiru El-Rufai, has said the Vice President Yemi Osinbajo is the Chairman of Nigerian Association of Short People.

El-Rufai hilariously made the announcement via his verified Twitter account, @elrufai, in response to a throwback video posted on Twitter by famous On-Air-Personality, Mr. Olateju Oyelakin (Teju Babyface). The Ogbomoso-born comedian shared a 1.34mins video of Governor El-Rufai featuring on Babyface’s show in 2010.

Babyface via his Twitter handle, @tejubabyfacetv, wrote “I AM A MEMBER OF THE NIGERIAN ASSOCIATION OF SHORT PEOPLE! @nelrufai is a self deprecating character 😃. Sir, I am taller than you o. Hian!
SEE THE FULL INTERVIEW NOW BY SUBSCRIBING TO KING OF TALK CHANNEL ON YOUTUBE”.

In the video clip El-Rufai made fun of himself, saying he used to be secretary-general of the ‘Short People Association’.

El-Rufai thereafter replied with “Yes…..I remember this @Tejubabyfacetv interview in 2010…..how time flies….HE VP Osinbajo is the current chairman of the Nigerian Association of Short People…

“So we are represented at the highest echelons of governance! Thanks Teju,”