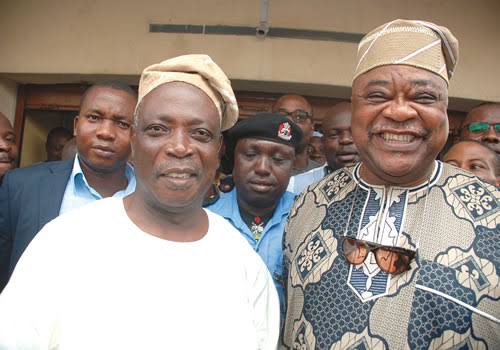 By Adams Akorede
Former Governor Rashidi Ladoja of Oyo state and National Leader of the Zenith Labour Party on Wednesday said his erstwhile deputy and successor, Chief Adebayo Alao-Akala was right in describing their Secretary to the State Government, Sharafadeen Alli as “the most experienced to lead the rebirth of the state from May 29, 2019”.
Alao-Akala who was Ladoja’s deputy governor between 2003-2007, said on a Yoruba radio programme last weekend that of all the contenders for Agodi government house, Alli, who served as their SSG, was the most experienced.
Drawing inference from Alao-Akala’s remarks, Ladoja was quoted in a press statement by the party’s PRO, Olajide Olanipekun, saying: “the Zenith Labour Candidate, Sharafadeen Abiodun Alli truly remains the most competent, experienced and outstanding as attested to by Chief Dr. Adebayo Alao-Akala to be entrusted with the governance of the state.”
Alao-Akala is also seeking reelection under the platform of the Action Democratic Party (ADP).
The ZLP leader who addressed jubilant supporters and enthusiasts of the party who trooped out enmasse to meet him during the campaign tour of Ibarapaland comprising Ibarapa Central, Ibarapa East and Ibarapa North Local Governments, appealed to them to vote Alli and all ZLP candidates in the coming elections.
Chief Ladoja accompanied by Alli, ZLP Oyo South Senatorial candidate Chief Aderemi Olajide; Dr. Adebayo Adepoju candidate for Ibarapa Central/Ibarapa North Federal Constituency; Mr. Bimbo Adepoju candidate for Ibarapa East/Ido Federal Constituency; Biliaminu Okesooto candidate for Ibarapa Central/Ibarapa North state Constituency; and Sunday Atunwa candidate for Ibarapa East state Constituency, said ZLP remains the best alternative “to lead the state out of its current state of hopelessness, poverty and deprivation by the ruling class”.
Ladoja told the crowd in Igangan, Ibarapa North Local Government that if they want a purposeful government that will pay salaries and pensions promptly and return the standard of education with free and qualitative education to the state like they experienced during his regime, they should vote ZLP gubernatorial candidate.
He remarked that Alli was a thoroughbred administrator with track records as a former local Government chairman, SSG and Chief of Staff when he was Governor.
Alli who pledged not to let the people down, used the opportunity to highlight his plans for the state workforce, pensioners, and the repositioning of health, education and other infrastructures, to meet the needs of the people across the length and breadth of the state.
He was also quoted as promising support for the farmers, traders and the elderly. Alli also pledged to provide employment for unemployed graduates, with a commitment to the stoppage of demolition of people’s means of livelihood and illegal forceful takeover of people’s landed property under the guise of ‘overriding public interest’.