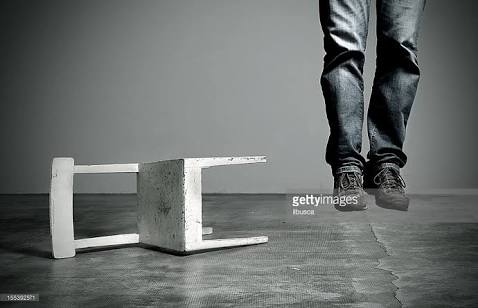 After days of sleepless nights due to ‘too much debts’, a 50year-old man committed suicide late Wednesday night.
In the message he left behind, he said he resorted to suicide for ‘face saving grace’ from his numerous debtors.
His remains were discovered in his elder brother’s house at Gangansi area of Ibadan.
Identified as Abass, residents said they saw him just few minutes before he was discovered to have taken his life.
An eyewitness said Abass was a gentleman, and a commercial motorcyclist. “He has children, both male and female, but his wife is not currently with him. He is in his early fifties. He was living here with us, and this house was  built by his brother.
“All we know was that he came back home hale and healthy yesterday evening, but suddenly someone shouted when he saw him dangling from the ceiling of the house. It was the person that alerted us to the ugly incident.
“On getting there we saw him up there, but we noticed one small paper beside him. We took it up and saw that he left a note where he wrote that he intentionally committed suicide because of too much debts he was owing people”, the man explained.
Some elders and landlords were seen having a meeting with some traditional herbalists who were demanding sacrificial materials to be used in appeasing some gods before the dangling body of the man could be brought down for proper burial.