...Says SDP is the only party to bring hope to the people 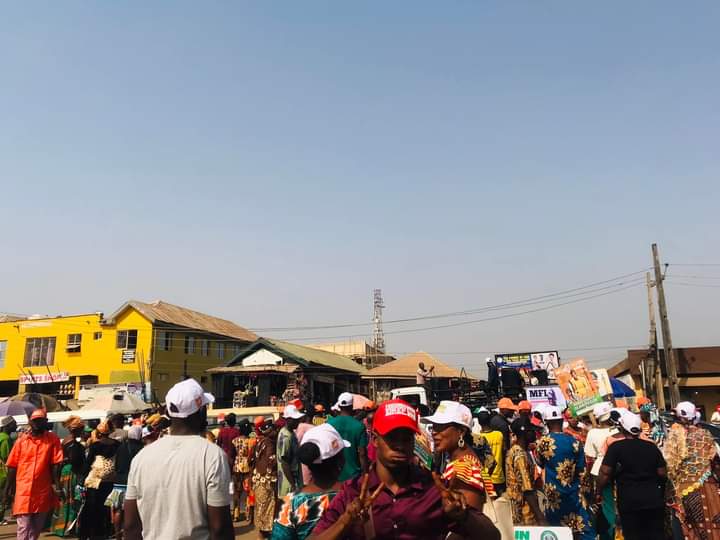 The Social Democratic Party (SDP) gubernatorial candidate in Oyo State, Mr. Michael Lana, has expressed confidence that the party would defeat the ruling Peoples Democratic Party (PDP) and other parties during the 2023 election and deliver dividends of democracy to the people of the state.

Lana gave the assurance on Tuesday while addressing mammoth crowd of party’s stakeholders and members from across the state at Mapo Hall, who staged sensitization rally across Ibadan, the state capital.

The rally which took off at exactly 8am at Oojo Roundabout, Ibadan, headed towards Sango through Bodija, Total Garden, Mokola, Beere and eventually terminated at the historical Mapo Hall, where the party supporters were addressed.

The walk was led by prominent leaders that include the Vice Presidential candidate of the party, Mr. Yusuf Salisu Buhari; the South West Chairman, Chief Alani Silas; the state Chairman, Mr. Michael Okunlade; the deputy governorship candidate, Alhaji Abdul Rahman Aloyinlapa and other candidates of the party.

Lana ceased the opportunity to highlight his agenda to move the state forward, said if he is elected the focus of his administration would be on education, health, agriculture and security, stating that he is out to make life better for the people of the state.

While maintaining that he is different from the other candidates given his disposition to tackle the challenges facing the state from the root, he warned that the state cannot afford another four years of the Governor Seyi Makinde-led administration which to him has moved the state backward on all the indices of development.

The former Attorney General and Commissioner for Justice, insisted that his agenda for the state put him in a good stead to win the elected, stating that the SPD is not new to the people and they know that the party is the only one to bring hope to them.

According to him, ” I have no doubt in my mind that our party, the SDP would coast home to victory in Oyo State during the elections as the people are eagerly waiting to send the present government of Governor Seyi Makinde packing from the Agodi Government House as it has not only disappoint the people by succeeding in moving the state backward.

“My pledge to the people is that I would be different from the other candidates who are not interested in asking relevant questions before telling them what they would do, from day one my focus would be tackling the various challenges facing the state from the root.”

Lana stated further that his utmost priority as governor would be to ensure that the state takes its rightful position among the states in the country, noting that his administration would deliver more dividends of democracy to the people of the state.

He then charged members of the party and people of the state to guard their PVCs and not be swayed by desperate politicians who are out to deceive them, declaring that it is their weapon to put in place in government that would bring life more abundant to them as well as guarantee better future for their children.