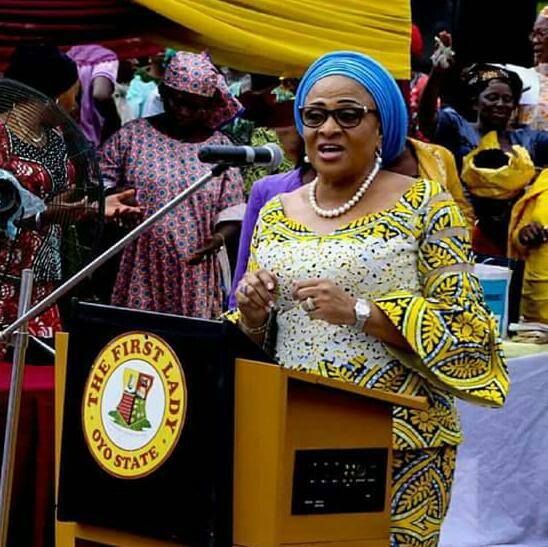 By Yaquob Temitope
Wife of the Oyo state Governor, Mrs. Florence Ajimobi on Monday distributed trailer loads of rice, milk, and other Ramadan welfare materials to children homes, widows and others from across the 33 Local Governments and 35 Local Council Development areas in the state.
The event attended by hundreds of widows, women in the All Progressives Congress and children from less privileged homes, was held at the Agodi government house, tennis court, Ibadan.
Mrs. Ajimobi who was full of praises to God for the grace of witnessing another Ramadan, urged all to use the opportunity of the holy month to ask for the forgiveness of their sins and greater Oyo state.
She called for loyalty of women to the APC, saying another four years would soon be around to return the party back ‘to government’s house by the grace of God by 2023.’
Mrs. Ajimobi appealed to the women to be steadfast and support the party especially the leaders, in their quest to reposition the party ahead of the next elections.
She assured them that by next Ramadan, she would again distribute items to them at their (Ajimobis) private residence in Oluyole.
Mrs. Ajimobi said the governor provided means for the welfare packages, calling on women and the benefitting homes, to accept them in good faith.
APC women leader in the state, Mrs. Mabel Williams and Olaoluwa Tolani from the ABC homes thanked the Ajimobis for the items.