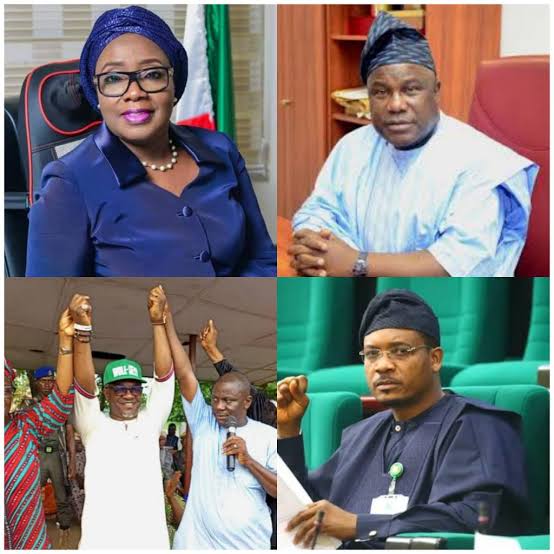 When the rare picture of Senator Fatai Buhari and Hon. Shina Peller in tete-a-tete surfaced on the internet about a week ago, it brought relief to the public. For those who have watched the campaign rhetoric of the two politicians; that particular display of camaraderie became the soothing balm needed to calm the fraying nerves of their tensed followers. Unsurprisingly that the campaign dynamics of the two politicians have been especially terrifying given that both were members of the same party until the outcome of their party primary gave one candidate an edge over the other.

Up until the months leading to the contentious Oyo APC primary, Hon. Shina Peller was still a bona fide member of the broom party. In fact, he won the 2019 House of Representatives election on the platter of the party and would have slug it out with candidates of other parties should he have claimed victory at that breakneck contest won by Senator Fatai Buhari last year. But the race for the next Senator from Oyo North Senatorial district goes beyond the two politicians. There is former House of representative majority leader, Hon. Mulikat Akande Adeola of the Social Democratic Party (SDP) and Hon. Solomon Akinwale of the PDP, both of whom are also making appreciable inroads into the district.

“The BAF (Senator Fatai Buhari) of a person returning to the red chamber for the third time would not come at a low cost,” Prince Joel Oyeyiola, a public affairs analyst told me in an interview.

“In fact, the cost is going to be substantial as it may take political, economic, and other dimensions.”

Prince Joel added that Senator Buhari is the candidate others are contending with. And that the Ogbomoso-born politician has the requisite legislative experience under his belt, plus his stewardship in the last seven years has positioned him to change the narrative of the region.

“But Senator Buhari will need to appease some gods of politics for him to win the coming election” the renowned public intellectual observed, “for him to be able to pull the trick and etch his name on the sand of time, he would have to make certain efforts of fence-mending and bridge building to defeat his opponents”. Prince Joel further contended that the race is still wide open, too long to call and that it is too early to give the victory badge to a politician.

Though, he noted that should the sentiment of having an Oke-Ogun son at the red chamber gain traction and resonate with people across the 10 local governments, Hon. Shina Peller might be warming up to serve as the next senator from the district. “What this election might do is to test the unity of purpose of the people of Oke-Ogun in terms of producing the next senator”, he said. But the voting pattern during the election is often shrouded in complexity and complication. Difficult to rate one candidate over another using a simplistic interpretation of their visibility and acceptance by the people. As a matter of fact, there is no one-size-fits-all approach to winning an election – less one campaign premised on a single narrative. And what history has told us is that harping a campaign strategy around one sentiment may backfire and crucially so, may not be enough to win at the poll.

He was however of the opinion that Senator Fatai Buhari may benefit largely from the wider acceptance of Asiwaju Bola Ahmed Tinubu. Advancing his point, he draws attention to the fact that the Presidential and National assembly election holds on the same day and that people may be sympathetic to voting for candidates of the same party instead of dividing their votes across different lines. Additionally, he averred that in this election, only Hon. Mulikat Akande poses a bigger threat to Senator Buhari’s eventual victory than any other candidate. “Hon. Mulikat has positioned herself as a serious contender and contestant in this poll” the astute public commentator asserted. “She is pulling the crowd and seems to be ahead of others in winning the minds and hearts of the electorates”. Though, he pointed to the visibility and acceptability of SDP in the district as a likely clog that may grind the former House leader’s wheel of electoral success.

Speaking further, he said the time factor may also not work in favor of Hon. Shina Peller and that his legislative scorecard in the last three and half years might also dent his chances at the poll. Although, he also noted that the Showbiz personality might still benefit from the sentiment of having an Oke-Ogun son in the Senate. He concluded that the choice of who represents the district is significant to the growth and development of the region. And that people must choose wisely otherwise the district is left in the realm of abandoned and neglected areas in the country. “Save for party structure which is under the fingertip of the Governor, Seyi Makinde, and perhaps, the religion factor” Prince Joel enthused “Hon. Solomon Akinwale may not have enough to convince the electorates on why they need to get him elected”.

Quite frankly, one close political observer in the district told me that the candidate of the ACCORD party, Hon. Shina Peller is determined to shock his adversaries. He said the campaign strategies of the party in the region have not only been aggressive but equally intensive. He added that members of the party have continued their political activities with eyes on the trophy saying that only the ACCORD party has ensured crystal clear representation of youths in their hierarchy. He equally noted that in other senatorial districts such as Oyo Central and South, the party has fielded candidates with charming, energetic, and charismatic attributes. Plus, the party appears to be serious about the business of politics compare to others who are yet to even solidly put on ground their logistics among others.

But another political commentator, Saheed Babatunde opined that the ‘Oke-Ogun lokan’ agenda may not fly adding that such sentiment may only resonate with electorates in Iseyin – the country home of Hon. Shina Peller. He pointed out that before Senator Fatai Buhari, the region has produced two successive Senators in the person of Senator Andrew Gbenga Babalola and Senator Hosea Ayoola Agboola (deputy chief whip on account of being the only PDP senator from South West). He furthered by saying that the scorecards of the two senators are before the public. “The Oke-Ogun Lokan agenda may have suffered a setback” the Saki-born commentator argued, “simply because no senator in the history of Oke-Ogun has recorded half of what senator Buhari has achieved”. People are also been curious and cautious about Hon. Shina Peller whose legislative aides are not even from his federal constituency.

“See” he quipped “the argument against Hon. Peller is weighty. It is in the news that all his legislative aides are either from Oyo town, Kogi, or Lagos. Sad that none is from the people he claims to represent at the National assembly. As for Honorable Mulikat Adeola Akande, the young analyst reflected, her party has put her at a great disadvantage. “She would have been an intimidating contender as a PDP flag-bearer” he concluded “but then, her efforts might likely disrupt and disturb the voting blocs of her former party from Ogbomoso axis”.

OYO101 is Muftau Gbadegesin’s opinion about Issues affecting Oyo state. He can be reached via @TheGMAKing on Twitter, muftaugbadegesin@gmail.com and 09065176850